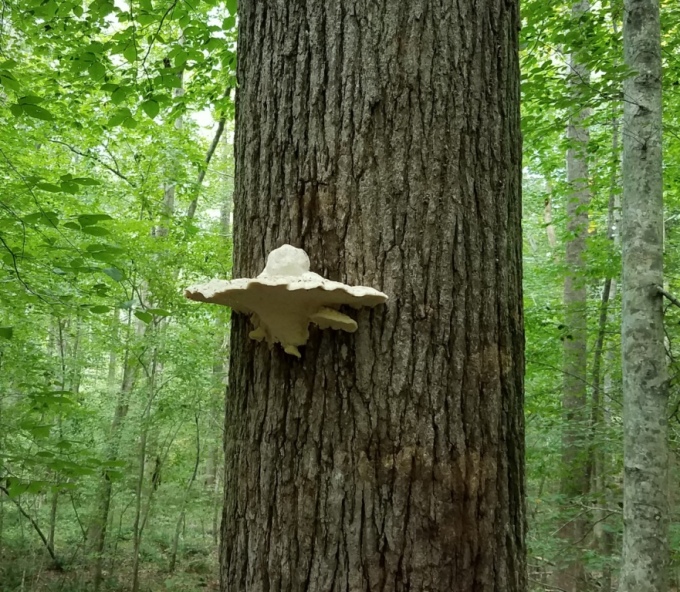 When a local deadline for forest land use reports passed in late fall, I had time to share photos from the past few months. Note:  Land Use Assessment is available in many Virginia counties (but not all) for property owners with 20 or more acres of woods.  You can check with your local Commissioner of the Revenue to see if it is an option for your property. 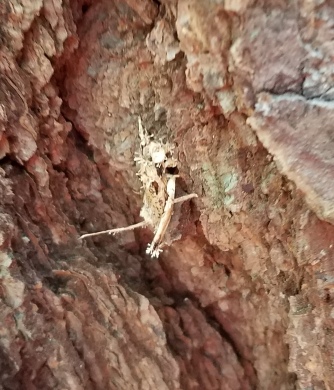 While walking with a landowner through a 23-year old loblolly pine stand to see if the stand could be commercially thinned, we encountered this grasshopper “shell” which appeared to be growing lichens.  Our forest health staff explained that this grasshopper died from an entomopathogenic fungus, sometimes referred to as zombie fungi.  A fungal spore infected this grasshopper, then consumed its body to grow a new fruiting body to release more spores.  So, what appeared to be lichen is actually the “mushroom” formed by the fungus.  The many species of “zombie” fungi are host specific, and serve as a natural control for many insect populations, such as our invasive gypsy moth.

When we experience hot, drought-y periods, pine bark beetles can kill their host pine trees by girdling the trees with their tunnels.  The lack of soil moisture prevents the pines from being able to drown out the invading insects with tree sap.  While trying to identify which type of beetle had killed a yard tree in Middlesex County, we found a histeridae beetle (genus Platysoma) that was infested with mites.  Keep in mind that the total length of the host beetle in the microscope photograph above is 2 mm.  Platysoma beetles are predators that eat ips beetles, so while we did not find an ips beetle, it is a sign that an ips species helped kill this particular loblolly pine tree.

It is common in July and August for foresters to leave the woods covered with “seed” ticks, or clusters of the larval stage of various tick species that are as small as seeds. Each of the tiny dots on the pant leg in this photois a tick larva.

I am always glad to say “¡Hasta la vista!” to them at the end of the summer.  There is much more to the tick story but I will save it for next summer.

While the ticks are no fun, seeing wildflowers and shrubs in their natural setting is one of the joys of working in the woods.  This shrub is Viburnum nudum, also called possumhaw.  The berries start out pink and turn deep blue, and are eaten by songbirds, wild turkey, and squirrels. 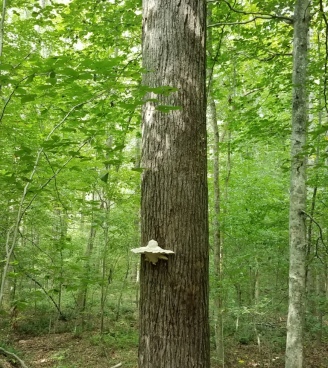 Summertime in Virginia provides the heat and moisture needed by all sorts of fungi in order to flourish. This appears to be a type of shelf fungi, possibly Oxyporus populinus. The mushrooms in the photo below had a fairy tale look on a particularly sweaty day.  A local expert identifies them as silky rosegill. 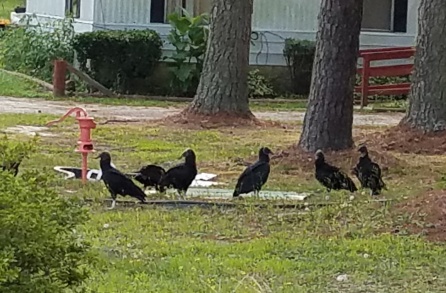 While many mushrooms thrive in the heat, these black vultures gathered around a sunken bathtub on an 80-degree morning.  After weeks of 90-degree temperatures, they were not bashful about seeking relief from the heat near a house.

While preparing for a talk on Forests and Climate Change, I ventured out to photograph a clearcut (below) on the water’s edge that has grown back in an invasive species, phragmites, or common reed. 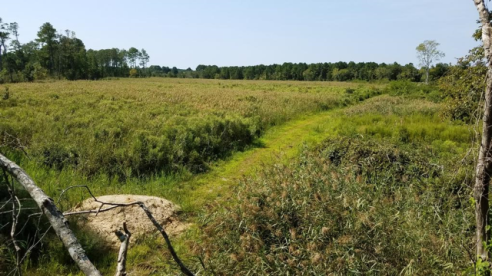 I was surprised to encounter a covey of bobwhite quail in such dense vegetation.  According to the landowner, quail have inhabited this tidal area for several years.  I heard the young quail peeping in the reeds, then two adult quail leapt into the road — one acted like it had a broken wing for several seconds (a defensive mechanism meant to distract predators away from their more vulnerable young), then both adults charged towards me. 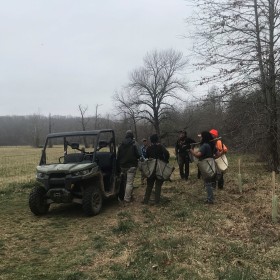